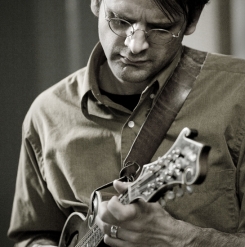 This year Matt Flinner joins us for the first time to teach swing mandolin alongside a couple fellas who’ve taught here a bunch, Jason Anick and Aaron Weinstein.

Bluegrass Now says of Matt: “Flinner provides the next logical evolutionary step to David Grisman’s unique ‘Dawg’ style,” while Jazz Times calls him “the most exciting and creative mandolin player on the scene today.”

After an early start as a banjo prodigy — he won the National Banjo Contest in 1990 — he took up mandolin. Fun fact: after winning that banjo contest, Matt went back the next year and won the mando award. He’s just that dang good.

In the years since, he has earned a deserved reputation as one of the leaders of the new acoustic/modern bluegrass style, and toured and recorded with everyone from Frank Vignola to the Nashville Chamber Orchestra. His current group the Matt Flinner Trio (with guitarist Ross Martin and bassist Eric Thorin) is breaking new ground in the string band genre. He’s also giving you permission to play Caravan slow, and funky:

Of particular note for Djuners: Matt is also the creator of an eight week (!) Gypsy Swing Mandolin course. Designed as a learn-from-home experience, this June Matt will bring the mountain to you. Designed to help you learn new ways of playing chord progressions and help you acquire the tools you need to play and improvise in the GJ genre, Matt’s lessons (and all that time he put in transcribing Django and Stephane’s solos!) are sure to cause more than a couple of “eureka!” moments around the Smith campus this June.