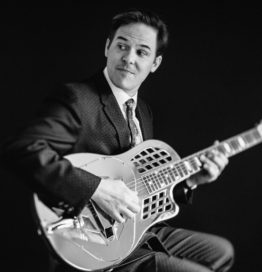 Hard to believe, given how long he’s been on the hot jazz scene, but Greg Ruby joined us for the first time just a couple Djangos in June ago. His classes were packed and well-received, in part because he was covering an artist-of-interest, Oscar Alemán. He had recently published the Oscar Alemán Play-Along Songbook Vol. 1, and given Alemán’s close association with Django Reinhardt and the Gypsy jazz tradition it was a natural fit for us.

Still is—so Greg will be back in 2022, but only for one day. On the Tuesday before Django Camp kicks off he’ll offer one of our daylong Special Offerings: A Day with Oscar Aleman. You can see all the details by following that link, and learn more about Greg by watching the video below and reading on…

Greg began playing swing and early jazz music while leading the bohemian life of a busker 25 years ago. Realizing the tips were far superior with jazz, he stuck with it and has become a respected performer, educator and author. Described as “Seattle’s premier hot jazz guitarist” by Earshot Jazz magazine, he has performed with Pearl Django, The Hot Club of San Francisco, Andy Stein, Dan Hicks, John Jorgenson, Frank Vignola, Howard Alden and The Tacoma Symphony Orchestra as well as leading numerous groups under his own name.

As part of Django Reinhardt renaissance of the early 2000’s, Greg formed the seminal group Hot Club Sandwich and later joined Pearl Django in 2002. His rock-solid rhythm guitar propelled the group through multiple recordings and their debut performance at the legendary Festival Django Reinhardt in Samois-sur-seine, France. In 2010, he released a record of all original compositions in the Hot Club tradition, Look Both Ways,which reached #1 on the Roots Music Review radio chart. In 2016, he was awarded arts, heritage and cultural fundingfor Syncopated Classic– a project which unearthed, restored and recorded the lost compositions by the eminent 1920’s Seattle jazz icon Frank D. Waldron. The resulting record was awarded the “Northwest Jazz recording of the year” in 2017.

Greg’s compositions have been heard on NBC’s Parks and Recreation, Freakanomics Radio and the documentary When Seattle Invented the Future. As a respected music instructor, he has taught at Django in June, Millwood Blues Week, DjangoFest NW, SUNY, the Seattle Jazz Night School and is the Guitar Week Coordinator for the Swannanoa Gathering. He has published the Pearl Django Play-Along Book Vol.1, Frank D. Waldron: Seattle’s Syncopated Classic, the Oscar Alemán Play-Along Songbook Vol. 1 and writes for Acoustic Guitar magazine.