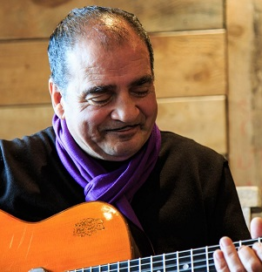 When Django in June began in 2003, many of us were still hearing the echoes from Tchavolo Schmitt’s album Alors?…Voilà!, a 2000 release that helped invigorate a resurgence in the stateside Gypsy Jazz scene. Powerful yet poetic, Tchavolo plays the guitar with a gusto that has always been a welcome reminder that this music is alive and breathing, born of passion and joie de vivre.

Born in Paris in 1954 and introduced to the guitar as a boy by his mother, young Tchavolo learned quickly. By the late 70s he had become a full-time musician after making a splash at the Darmstadt Musikfest der Zigeuner. After a spell alongside violinist Wedeli Köhler in Hot Club da Sinti, he reunited with his cousin Dorado Schmitt in 1993 for the much-loved Gypsy Reunion album.

Following on the success of “Alors?,” Tchavolo released another album every few years while also branching out into film to play the guitarist and teacher Miraldo in Tony Gatlif’s 2002 film Swing. But for a musician like Tchavolo, recordings only tell half the tale; to get a sense of just how strong a personality he is — and how much of an effect he has had on the growth of Gypsy Jazz in the modern era — there is no substitute for seeing him (and his shoes!) in person. In 2020 Django in June is proud and pleased to offer you the opportunity to do just that.