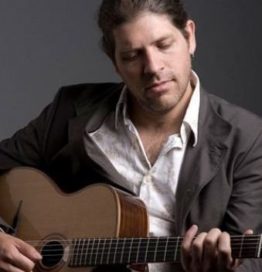 Stephane Wrembel will be joining us as a special guest teacher on the last full day of Django Camp this year—Saturday the 16th. He has been here as a teacher and concert headliner many times, so I’ve written and re-written his profile almost as many. Here’s what I wrote last year, when Stephane was here with his old friends Emmanuel Kassimo and Serge Krief.

I attended the Festival Django Reinhardt in France in 2003 and that’s where I first realized that jazz manouche was really different than any guitar style I had ever encountered in the US. When I returned home I wanted to learn more about it, so I asked around in search of a teacher. Only one name came up, again and again, “Stephane Wrembel.”

Since those early days of the current Gypsy jazz renaissance, Stephane has been a precious resource and inspiration to many of us with an interest in the style. He has been on our staff and stage many times over the years. Here’s a clip from one of his earliest performance at Django in June, in 2006, back when our concerts were held in Helen Hills Hills Chapel. Joining Stephane were David Langlois on washboard kit and Jared Engel on upright bass.

Outside the micro-niche of djangologist-guitarists, Stephane is best known as the composer of “Bistro Fada,” the theme song from the 2011 Woody Allen Oscar winning film, Midnight In Paris.  He performed at the 2012 Academy Awards as part of Hans Zimmer’s “All Star Band,” and later that year, Midnight in Paris won a Grammy for “Best Compilation Soundtrack for Visual Media”.   Here’s the original from that soundtrack:

Stephane produces his own annual Gypsy jazz event, Django A Gogo, which in 2017 included a concert featuring himself, Stochelo Rosenberg and Al Di Meola at Carnegie Hall. (So, in case you want to know how to get there, Stephane knows!) In conjuction with that concert he released 2 recordings, The Django Experiment I and II.  Both feature original compositions alongside interpretation of songs composed by or oft-associated with Django. Like this one, Viper’s Dream:

Any year is a good year to have Stephane Wrembel back. But 2017 offers us a special opportunity because of the presence of both Emmanuel Kassimo and Serge Krief. Stephane and Emmanuel learned to play jazz manouche together as teens in and around Fontainbleau, France, where they jammed for countless hours as only obsessive teens can.  Their primary teacher lo these many lunes ago—none other than Serge Krief. This, friends, is a reunion you do not want to miss.