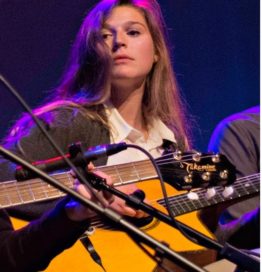 Sara L’Abriola was born into a very musical family in 1998 in Garrison, New York. Her father Art is an award-winning sound designer and composer; her mother, a singer/guitarist who among other gigs performs with the trio, MotherLode.  Sara’s own early musical training included classical guitar at 8 years old, but at 13 she discovered and became passionate about the music of Django Reinhardt. As fortune would have it, Garrison is within studying distance of one of the most talented Gypsy jazz guitarists on the planet, Stephane Wrembel.

Under Stephane’s guidance, Sara began transcribing Django Reinhardt’s solos and developing solid Gypsy jazz technique. That alone is a piece of work that would keep most of us busy for a lifetime. But here’s Sara, at 19 years old, proving that she has more than mere technique and vocabulary at her fingertips—she has something to say.

(The contribution of every performer in this terrific video is worth enjoying, but if you’re in a rush, Sara’s solo starts around 2:30.)

After finishing high school, Sara moved to New York City and began playing full time. One notable gig was at Carnegie Hall where, at eighteen,  she took the stage with Wrembel, Stochelo Rosenberg, and Al Di Meola as part of Stephane’s Django A Gogo festival. Most of her gigs are somewhat more modest affairs—the steady sort that keep mustard in the fridge of working musicians. The kind at which a young and promising artist can hone her craft and develop her unique voice. This kind:

Sara joins our staff for the first time this year, as does another of New York’s working Gypsy jazz guitarists, Lisa Liu. One of Lisa’s signature projects is her Ladies Who Jazz series of interviews and performances with women jazz musicians. She featured Sara L’Abriola in a two-part series in 2016. The first 5 minute video is an interview on a breezy rooftop. Part two is Sara and Lisa breezing through a challenging composition of Django’s,  “Fleche D’or.” Enjoy…