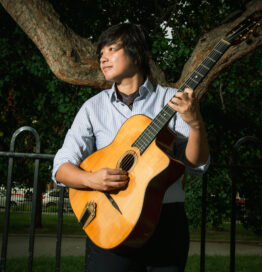 Lisa Liu joined the Django In June teaching staff in 2018, and has done a terrific job helping all people, at all levels of ability, grow on their gypsy jazz journey. She takes a lot of joy sharing what she knows and seeing her students gain confidence and knowledge on their instrument.

Lisa Liu is a guitarist based in Brooklyn, NY. She is an Artist Ambassador for Santa Cruz Guitar Company and is endorsed by Krivo Pickups who make custom handmade pickups for gypsy jazz guitars.  She also has an online Teaching Channel on Truefire called The Shed.

Liu has performed with jazz luminaries such as Mimi Fox, Samy Daussat and Stephane Wrembel.

Here she is playing an original Django Reinhardt tune, “Duke & Dukie,” with other esteemed Django In June faculty at The Strathmore Arts Center:

“Liu performs with a confident grace that reveals an intuitive command of her instrument, and her versatile picking style ranges from a playful nimbleness to straight-up jamming.” -Christa Titus/Billboard Magazine

Lisa also runs a video interview series called The Bridge where she features woman identifying, non-binary, gender expansive people who play jazz. Her goal is to make the realm of jazz more inclusive to all kinds of people. Here she is interviewing fellow Django In June attendee, violinist Nataly Merezhuk: