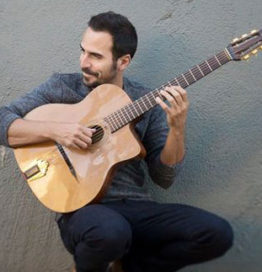 Gonzalo Bergara has emerged a virtuoso composer and lead guitarist, mixing a cascade of arpeggios with the sounds of Paris and his native Argentina, to forge his own style of progressive Gypsy Jazz.

That’s the opening sentence of Gonzalo’s bio on his website. And it’s true.

Gonzalo began playing professionally at age 16 in Buenos Aires. By 17 he was already fronting his own blues trio on National Television. In 2000, at age 19, he arrived in America.

And in 2009 he paid his first visit to Django in June. Here’s his quartet performing that year, back when our concerts were held at the Helen Hills Hills Chapel of Smith College. He’s playing one of the above-mentioned compositions of his own, Elena’s Bossa.

A simple youtube search for “Bergara, Django in June” will bring up many more selections from his appearances here over the years, most recently in 2013 when he was featured in concert with Adrien Moignard. Here they are on the lawn of Smith campus sharing a playful Dream of You. (Courtesy Patrus53.)

Since that last visit, Gonzalo has continued to write, record and perform exquisite music that elucidates the essential elements of jazz manouche while expanding our sense of what that tradition might encompass. We’re including one of his compositions, Como una flor, among our Tier 2 Core Repertoire for camp this year.  I say if the Gypsy jazz tradition can’t make room for that, then somebody’s going to have to lend me a sledgehammer. We need to take down a wall.

Or two, because we also have to make and for this, another of Gonzalo’s compositions, Febrero.