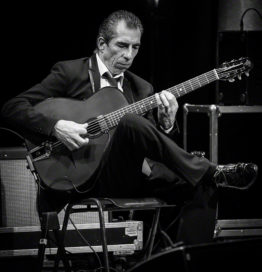 I give you the full bio of Angelo Debarre from his own website:

Angelo Debarre was born in Saint-Denis, Paris, and began playing at age eight. In 1984 he formed his first group, the Angelo Debarre Quintet. In 1985 the group was hired by Serge Camps to play at his Parisian café, La Roue Fleurie, where Angelo was discovered by producer and guitarist Jon Larsen. Angelo has performed in several Romani and jazz festivals, including Birdland’s annual Django Reinhardt Festival. He recorded Mémoires: Memories of Django with Tchavolo Schmitt.

To call this micro-blurb “understated” would be, well, an understatement.

By way of putting flesh on the bones of that skeleton, I’d first suggest a rephrase of the claim that Jon Larsen “discovered” Angelo Debarre at Camps’, La Roue Fleurie. How ’bout we say, “they met each other,” just to remove any whiff of cultural colonialism, while taking nothing from the significance of that meeting for both men. It led to a 1989 recording on Hot Club Records modestly titled, Gypsy Guitars. I encourage you to read Larsen’s original liner notes to that recording, which include details such as this doozy: “11 numbers were recorded on first takes.” Yowza.

I wonder if this was one of them. If Paul “Tchan Tchou” Vidal’s, “La Gitane,” is now a standard of the genre it is in no small part owing to this performance by Angelo Debarre from Gypsy Guitars:

The following is from Larsen’s 2011 addendum to the album’s original liner notes:

22 years have gone since the recording of Gypsy Guitars, and it has remained the reference album in the genre. A genre that actually did not exist yet at the time we recorded this, but the release of the album Gypsy Guitars triggered the renaissance of the Django music in France. The subsequent year Stochelo Rosenberg, in the Netherlands, achieved a major success with his amazing debut album Seresta, which came by as a direct inspiration of the Gypsy Guitars album. Another year later, and Jimmy Rosenberg entered the international jazz scene, triggered by Stochelo’s success, et voila – the international breakthrough for the new wave of Django inspired music was a fact. The rest is history.

I leave it to better music historians than me to confirm or quibble with the details of Larsen’s remarks. But it would be hard to argue against the broad outline of what he’s saying: in the late 1980’s and early 90’s the musical genius and astounding technical abilities of Sinti musicians playing within the same (broad) tradition as Django Reinhardt once again breached the confines of Gypsy camps and cognoscenti and sent a “new wave of Django inspired music” washing across western Europe. It would take another decade for that wave to reach the US. But when it did, the first names we heard included those that Larsen mentions. Always among them: “Angelo”.

Since that time Angelo Debarre has been composing, recording and performing at the highest levels of the Gypsy jazz genre.  The first decade of the 2000’s brought him together with virtuoso accordionist Ludovic Beier for a number of recordings. Here’s they are playing a Debarre composition, the title track  from their 2004 release, Entre Amis.

Debarre’s guitar style has been the object of much study—most of it private, heavily labored, and uncatalogued. For those who would prefer to tackle that material with an assist, there are at least two good options. One is the two volume book/CD set, “Astuces De La Guitare Manouche” (published in English as “Gypsy Guitar: The Secrets as Played by the Masters”.) The other comes to you courtesy of  Denis Chang’s incredible DC-Music School, which now offers a multi-volume series of video lessons, “In The Style of Angelo Debarre.” Here’s an excerpt from one of those videos, an improv etude on “All Of Me”, played at an up tempo.

It has been many years since Angelo Debarre last performed in the US, and never has he been in residence as an instructor for such an extended stay. We have William Brunard and Denis Chang to thank for their assistance in bringing Angelo to Django in June this year. William has been performing with Debarre for several years now, often with Angelo’s son Raangy on rhythm guitar. Both William and Raangy will be on staff—and on stage—at Django in June this year as well, joining one of the few contemporary Gypsy jazz guitarists who, really, needs no introduction.