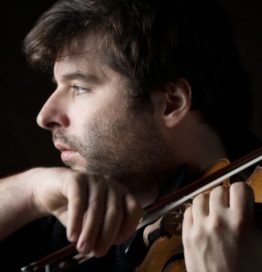 When I am considering artists for Django in June I often check in with other musicians whose opinion I trust. One such musician is Sébastien Giniaux, a two-time headliner at Django in June who is, among many other projects, currently a member of the Mathias Lévy Trio. So I ask him, in confidence, what does he think of Mathias? His (unedited) response:

Mathias is the best violin player I know and one of the best musician I met in all my musician life.

We can stop right there. You know enough. Done. Just come work with him.

But if you insist…here’s a little something Seb and Mathias threw together over a bottle of wine provided by, well, you know who.

Born into a family of music lovers in Clichy sous Bois, Mathias Lévy began his studies of violin and piano at the age of 5. At 16 he won first prize for violin and chamber music at the Conservatoire du Raincy, a harbinger of other accolades to come:  in 2006 he won the Jazz competition in Sète; in 2011, he took the Grand Prix Stéphane Grappelli  at the International Festival of Violin of Calais.

The connection with Grappelli does not stop with Lévy having won that last and very prestigious prize. While maintaining a busy career of teaching, performing in a variety of genres, film scoring and composing, Mathias has been a serious student of Stephane Grappelli’s œuvre. That study has included not only the years during which Grappelli, alongside Django, helped define what we now recognize as a distinct jazz tradition, but also the long career Stéphane enjoyed after Reinhardt’s death in 1953. In recent years Lévy has developed a number of programs dedicated to the co-founder of jazz manouche.  One quartet offering such an hommage included Rocky Gresset along with our old friends William Brunard and Sébastien GiniauxÇ

That program has by now evolved into “Revisiting Grappelli,” with Grappelli’s own bassist of 8 years, Jean-Philippe Viret, as musical director, and Séb Giniaux on both guitar and cello. (Both of whom will also join our staff of artists this year.) The Mathias Lévy Trio recently had the opportunity to perform “Revisiting Grappelli” at the Philharmonie de Paris.

For that performance Lévy played Grappelli’s own violin, on loan from the musée de la musique. We can’t bring you the violin. But we can bring you the hands that made it sing. Gently, gently..grab ’em.