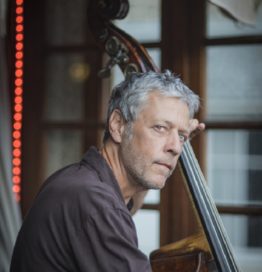 Jean-Philippe Viret joins us this year as bassist for the Mathias Lévy Trio and the musical director of the program they have developed, “Revisiting Grappelli”. He came by that latter role as no accident, having worked for some 8 years with another trio—one led by Stéphane Grappelli himself. Here’s Jean-Philippe performing with the Stéphane Grappelli Trio in Warsaw in the early 90’s. They are joined by McCoy Tyner on piano.

Viret was born in Saint-Quentin, France in 1959. And though in writing these brief bios over the years I have grown accustomed to recounting that this artist or that began learning their instrument somewhere between the womb and the cutting of the umbilical chord, Viret did not begin serious music study until reaching a wizened 18 years of age. But from that point on it was serious study, indeed: double bass with Jean-Paul Macé, then Jacques Cazauran; harmony and counterpoint with Julien Falk.

In 1981, he participated in the creation of l’Orchestre de contrebasses (double bass orchestra) with which he played for more than 30 years. As any great bassist will be invited to do, he has ably served as sideman for many solo artists, but he has also led a number of inventive ensembles: his Trio Viret (with whom he has recorded 7 CD’s), 60% de matière grave (a trio of bass saxophone, tuba and double bass), and the string quartet, Supplement d’âme.

Sample any of these online and you’ll quickly get a sense of the breadth and, more literally, the depth of M. Viret’s musical vision. We’ll have our own opportunity to gaze upon that musical landscape through the Mathias Lévy Trio’s performance of selections from “Revisiting Grappelli” during our weekend concerts. In classes and jams during the week, though, we’ll narrow our lens to focus one exquisite detail from the world and work of Jean-Philippe Viret. This: