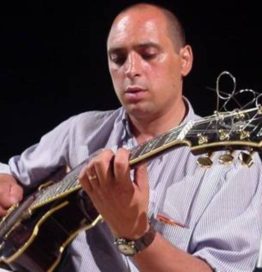 At the time I am writing this—many months before Django in June—I have yet to meet Serge Krief. But I had no fewer than three early introductions to him when I first got seriously into jazz manouche.  The first introduction was through a documentary, “Django’s Legacy”, made well before the current renaissance of Gypsy jazz. It featured several of the—then very young—guitar players most responsible for that renaissance: Bireli Lagrene, Jimmy Rosenberg, Stochelo Rosenberg, Boulou Ferre, Gary Potter and one Serge Krief.  Here’s a clip from that documentary, in which Serge and his long-time accompanist Richard Ciche play “Valerian Valse.”

The second intro came on my 2003 trip to the Festival Django Reinhardt in Samois-sur-Seine. I was new to the style at the time and my French was halting, so I was fortunate that a very friendly young man named Thomas Joyeux took me under his wing. Turned out he was a fine guitarist himself so I got to ask a lot of questions about his novel guitar technique, one that would have seemed idiosyncratic if not for the fact that everyone else there, from the campgrounds to the mainstage, was using it too. He answered a lot of my questions about the right hand technique he was using, the chord voicings, the arpeggios, the tunes. His own teacher: Serge Krief, of whom he spoke with great fondness and respect. Here’s another clip of early Krief and Chiche, playing that same festival way back in in 1990. Serge takes multiple choruses on a Django classic, Blues en Mineur. (By the way, Nathan Royal has transcribed several of those choruses for you and we will make them available as part of our “Get Ready” materials.)

Over the years of Django in June since then I have met quite a few young masters of Gypsy jazz guitar. Many, many, have studied with Serge Krief. To cite just two examples, Emmanuel Kassimo—also joining us on staff this year—studied with him along with the person who gave me my third early-introduction to Krief:  Emmanuel’s pal, my first Gypsy jazz teacher, and one of the most accomplished jazz manouche guitarists inhabiting the planet these days, Stephane Wrembel. The clip that follows is another oldie. The song is a Gypsy standard, Dark Eyes, featuring Serge Krief and accordionist Félix Bélleau. Krief enters like a freight train at the :35 mark. Driving that train, on rhythm guitar, are a pair of kids named Wrembel and Kassimo.

Since those early days Krief has stepped effortlessly over the borders of genre as he has explored his interest in modern jazz, fusion, and funk, all the while staying rooted in the music of Django Reinhardt. We could go on for quite some time here introducing you to the many sounds of Serge Krief over the decades. But let’s not. Let’s make that introduction in person, at Django in June 2017.