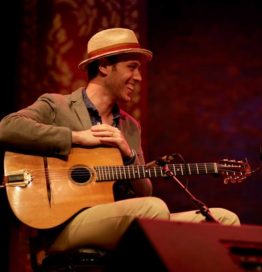 I give up trying to keep up with Brad Brose. Go on, you try: Google, youtube, the works.  You’ll find so much in so many different places. Here’s Brad on resonator guitar, on tenor banjo, on selmac, on an old archtop. Here’s Brad in Spain, in Switzerland, in Italy, in Belgium; in New York, in California, in Saratoga, in the Pacific northwest.

Thing is, he’s always playing in good company and always playing good music. Like this, the sort of casual hang one might enjoy of a summer afternoon in Paris:

Though he started joining us by trekking east from California, Brad then headed west to help out at Django in June from Europe for several years. He served admirably there as a Django in June goodwill ambassador, talent scout and bilingual fixer. He played a lot there, with lots of people, and made it look easy. It’s not.

Brad’s back in the US now and Caleb Milestone managed to catch up with him in upstate New York for his “the Instrumental Milestone” series on Youtube. We’ll share that below. But if you, like me, have trouble keeping up with Brad Brose, no worries—we know where to find him June 13-19, 2022.