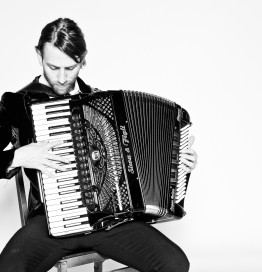 Dallas Vietty helped get Django in June’s accordion program off the ground years ago and kept it afloat for years thereafter. He’s been away for a couple years now so it is with great pleasure we welcome him back in 2020 to work alongside Dominique Paats and Frank Petrilli.

Dallas is very active on the East Coast concert and festival scene.  Now in Boston, now in Baltimore, Philly, New York and points well beyond — you will find him wherever some Gypsy jazzer needs a skilled accordionist deeply familiar with the genre. Here he takes a squeeze at one of the true classics of said genre, Django’s “Nuages.”

Speaking of classics, here’s one from a another genre that Dallas has taken a shine to in recent years, Brazilian choro.  The group, Passarinho, [português for “little bird”] formed around a shared passion for instrumental music from around the world.  Dallas is joined by Bryce Milano on guitar and Jim Hamilton on pandeiro. The tune is Pixinguinha’s “Um a zero.”