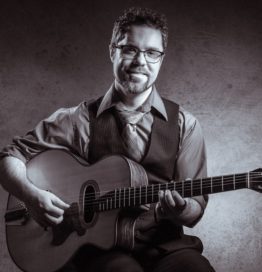 Jack Soref’s presence on our teaching staff is old news but good news at Django in June, having been with us for many years. Behind the Django Curtain, Jack helps coordinate our instructional program by welcoming and orientating new teachers, gathering up class descriptions, etc. If you’ve used any of the materials on our Get Ready! page, you have Jack Soref to thank.

But Jack’s main gig out in the wide world is playing and teaching. Here’s the title track from his 1919 release, Rain on the Terrace.

Born and raised in Madison, WI, Jack has spent the last 15 years living in Boston, where he has been one of the pillars upon which the city’s fairly substantial Jazz Manouche music scene rests.

As a teenager, Jack began studying the guitar with Madison-based Jazz Mandolinist and guitarist Sims Delaney-Pothoff. Jack became captivated by the music of Django Reinhardt after attending the International Django Reinhardt festival in Samois-sur-Seine France in 2002. After high school, he attended the Berklee College of Music, where Jack received his Bachelor’s degree in 2007. In 2011 Jack spent half of the year living in Paris France, where he could study the music of Django Reinhardt at its source. In 2013 Jack joined the group Ameranouche whom he toured and recorded with for the next five years. He can currently be heard performing with many wonderful musicians from all over the Massachusetts music scene.
​
Jack has performed at jazz clubs, restaurants, concert halls, and festival stages all over the USA as well as internationally on stages in France, Canada, and Scotland. His guitar playing has been heard on radio shows such as NPR’s ‘Here and Now’, NPR’s ‘Says You’, Lost Highway on WMBR, WZBC’s Sunday Morning Country with Cousin Kate, as well as PRI and BBC’s Internationally distributed radio show ‘The World’.