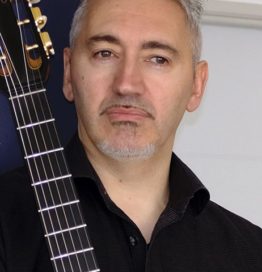 Although Emmanuel Kassimo has been on our short list for — well, for as long as we’ve had a list of artists we’d like to host — he was here for the first and only time three years ago, in 2017. At that time he was still playing with his longtime group, Am Ketenes, and we hosted something of a reunion of “Manu” with his old friends Stephane Wrembel  and Serge Krief.

Emmanuel began playing this music at the age of 10 with his father, grandfather and uncles—all guitarists. Until he was 20 he scarcely played outside the circle of his family and close friends. In the mid 90’s he settled southwest of Paris, in the region where Django spent his final years and which is to this day an important center of jazz manouche. There he met his longtime rhythm guitarist, Pablo Robin, and in 1999 they established the group with which Emmanuel was associated for years, Am Ketenes. (“All together” in the Tsigane language.) Here they are playing a tune on which Django Reinhardt took one of his most famous—and most studied—solos, “I’ll See You In My Dreams.”

Emmanuel credits Pablo’s father, Retcha Robin, as an important influence in another of his specialties—one that sets him well apart from most other riff slingers—the singing of manouche songs that have no place in the “jazz” canon. Maybe we can tempt him to treat us to some of that while he’s here. It won’t take any coaxing, though, to get you some of this:

We’re happy to report that although 2017 will forever remain Emmanuel’s first visit to Django in June, it will soon no longer be his only. And whereas last time he came as a bearer of the pure Gypsy jazz tradition, he arrives this year with a decidedly eclectic trio.  The group’s name, Mysterious Travellers,  is borrowed not from Django/Grappelli, but from  Zawinul/Shorter (Better known as Weather Report.) But even that doesn’t provide a clear clue as to just how freely these particular Mysterious Travellers roam, like Gypsies, across the boundaries of genre that the music biz tries so hard to secure. This quick video does though: