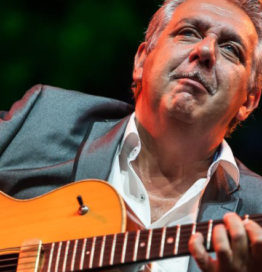 Romane’s works represent nothing less than a milestone in the history of Gypsy jazz. Grandson, son and father of guitarists, he was trained in the Old School—at home and at la Chope des Puces by Mondine Garcia alongside Mondine’s son, Ninine. Now virtually anyone would count him among the most influential musicians and teachers of the Gypsy jazz community.

He came into wider recognition during the Gypsy jazz revival that started in the 1990’s and continues to this day. Part of his success can be attributed to his compositional skill.  Few current players can claim to have written a Gypsy jazz standard. Well here’s one—and one included in this year’s Core Repertoire—Romane’s, “Swing for Ninine.”

Romane was among the first to produce authentic, reliable jazz manouche method books and videos for guitarists. I myself (Andrew) came home from my first trip to Samois with his Impair et Valse in my suitcase and found it a great, if challenging, intro to that genre. (His take on “La Valse des Niglos” is among the material of our Tier 2 Core Repertoire for this year.) He founded the first Gypsy jazz school at the renowned Chope des Puces, one that featured first class teachers such as the Ferré Brothers, Christophe Astolfi, and many lesser known but brilliant musicians.Here’s a short example of his own instructional style, with English subtitles. And remember, fashions change…but not the secrets of music! 🙂

The Romane-Daniel John Martin Quartet has just completed recording an album and are touring these days to showcase it. Along the way, Romane offers a little history refresher for those whose familiarity with the genre is not as deep as his own. Which is to say, virtually all of us. Here he is doing just that for an audience at Club Nubia in the western suburbs of Paris. The history lesson is followed by the quartet’s take on yet another tune in this year’s Core Repertoire, the classic Django ballad, “Anouman”.