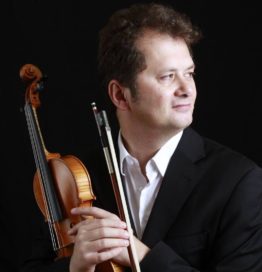 Daniel John Martin, aka “DJM”, is a central figure of Parisian Gypsy jazz. Violonist and singer, he’s the MC of Gypsy jazz concerts and jams at “Aux petits joueurs”, where you can hear many of the best players in the world in a very (some would say, overly) casual setting. The short list of his invitees would include  Angelo Debarre, Patrick Saussois, Adrien Moignard, Sébastien Giniaux, Boulou et Elios Ferré, and Tchavolo Schmitt. And of course, Romane, with whom DJM will join us at Django in June this year. Also on hand will be the rhythm guitarist in this video, Julien Cattiaux.

DJM set himself to to creating a coherent approach to improvisation after a novice asked him what happened in his mind when improvising. The goal is to hear the way musical ideas naturally evolve and transpose them directly on the violin. His method is a work in constant progress, but has proven its effectiveness with Daniel’s many students. And of course, it shows in his own fine playing—as here, in the enviable company of William Brunard  and Tchavalo Schmitt

A year and a half ago DJM underwent  surgery that brought him to reflect on the fundamentals of his violin technique. This has meant drastic changes in his posture and the way he holds the violin, topics of great interest to any violinist with a body to care for. It was his meeting with Didier Lockwood in 1993 that led him to dedicate his career to jazz and for years he used what he refers to as “a light Didier Lockwood style”. That, too, has evolved into a more full bowing, one with more slurred notes. But this guitarist (Andrew) will have to leave a deeper and better explanation of all that to Daniel John Martin himself. Avail thyself!

We’ll feature the Romane–DJM Quartet during our weekend concerts. Here’s a sneak preview—a rough mix from their new recording-in-progress:

Care to spend a little more time with DJM, pre-DiJ? Here he is as featured guest on Matt Holborn’s Jazz Violin Podcast: