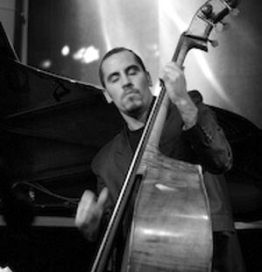 Michel may have first been known as the son of a famous Italian bass player, Dario Rosciglione. By now, however, he is a leading light on the European jazz scene in his own right. On stage and in the  studio with the likes of Dave Liebman, Kurt Rosenwinkel, Kenny Barron, Christian Escoudé countless others, Michel has made his name in the world of mainstream jazz. Here his is laying down a hard bop groove with his own Quintet

He comes to us, however, as bassist for the Romane-DJM Quartet. They ended up at Django in June the rare and easy way—they sent an email with links to music beautifully made. Here’s a poorly kept secret: nobody makes beautiful music with a weak bassist.

Michel started to play the bass later than one might guess—16 years old—with classical training in the French model. For jazz it was straight American, no chaser. But in France and Italy, jazz meets manouche more frequently and as less of a shock than here in the States. Romane and Daniel John Martin could have called any bassist they wanted for their project. And they did. Here’s just one sample of why, and why you’ll want to work with Michel Rosciglione this summer at DiJ.