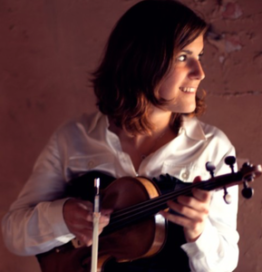 Passionate about violin from an early age, Caroline Bugala was quick to inspire passion in her listeners too: she won the National classical music contest in Lyon at age 10. She continued her classical violin studies at the National Conservatory of Lyon, from which she graduated with a médaille d’or at 17. Then it was jazz studies with the late Didier Lockwood—she graduated from his school in 2005 and taught Music Theory there for three years.  All of which has prepared here for the life of the gigging artist, which now includes having your performances videoed from every which angle.

Like so many of the artists who visit us, Caroline plays in a wide variety of musical ensembles and styles. She launched her own group, the Bugala Quartet, in 2011 to explore Latin jazz, Gypsy, Balkan, afro-jazz and whatever else strikes her fancy. She heads to Copenhagen regularly to play with Kjeld Lauritsen on Hammond organ and Espen Laub Von Lilianskjold on drums. And she is right here in the center of the string section of  Diego Imbert’s ambitious “Tribute to Charlie Haden:”

But really, mostly, we’ve invited Caroline Bugala to join you this year for a simple reason: because those who know both her and this event say she’s going to fit right in—as she does here with an old friend of Django in June, Emmanuel Kassimo. Caroline played with Manu’s, “Am Ketenes” from 2006-2011. The tune, too, is an old friend: “Coquette.”