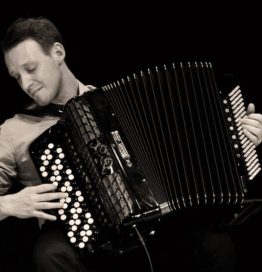 Grandson of an accordion player, Erwan started his first music theory lessons and the practice of piano at the age of 16. Two years later, he picked up the accordion – the “shivers box” as is said in French. He got involved in various projects in various styles – Jazz, Nuevo Tango, Chanson Française, Jazz Musette, Funk, Hip Hop—and took every opportunity to hone his chops, enrich his style and develop his own personality. Here is a medley of all that:

From that broad palette, Erwan honed in on jazz musette and in 2009 founded Swing of France with Thomas le Briz (who joins us as a rhythm guitar specialist at DiJ 2019.) The group pays tribute to accordion giants who have left oversized footprints in the field of jazz manouche: Tony Murena, Gus Viseur, Jo Privat, Joseph Colombo and Medard Fererro. Here, enjoy the stylish wallpaper – and SoF’s rendition of the Gus Viseur masterpiece, “Jeanette.”

We’ll ask the members of Swing of France and their guest guitarist Daniel Givone to give special attention to the work of Jo Privat in 2019. This year marks the 100th anniversary of Privat’s birth, and Swing of France has just recorded a tribute to his classic album, “Manouche Partie.” The original featured Matelo Ferret on guitar, so there’s something on that disc for just about everyone. For you, for now, here’s just one cut from the disc—Privat’s, “Java Manouche.”