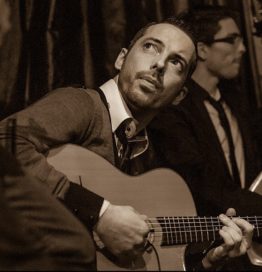 Ninine Garcia has been know to admonish students of Gypsy jazz guitar, “Learn to walk before you run.” In the context of Gypsy jazz, that roughly translates as, “Yo Slick, work on your rhythm playing!”

If you’d like to take that wisdom-packed advice to heart with a true specialist at Django Camp this year, we give you Julien Cattiaux, a card-carrying member of the exclusive Most Requested French Rhythm Players Club. (We made that up, but not before we invited Matthieu Châtelain, Hono and Benji Winterstein and Remi Oswald to join.) Julien’s discretion on stage matches the elegance and efficiency of his rhythm playing—traits you’ll need when you accompany the likes of Romane, Tchavolo and Samson Schmitt, Noé Reinhardt, Rocky Gresset, Antoine Boyer, etc. Here’s Julien in the good company he’ll be keeping at DiJ 2019 when our weekend concerts roll ’round:

His own studies began with a flamenco teacher and he worked hard at it, until the fateful day when his teacher played a minor 6 chord. With that, as for so many of us, the damage was done—Julien was infected with the gypsy jazz virus. Fans of the great Raphaël Fays will be interested to know that Julien played rhythm on Fays’ latest flamenco fusion album. Here they are in a live performance in Paris. (Julien’s ensemble work begins soon after the 7:00 mark.)

Julien teaches the way he learned—visually and orally. Not a lot of music theory, just open ears and an honest (which is to say, a repeatedly repeated) attempt to find that sweet spot of tempo, feel and tone. Our artist profiles of Romane, Daniel John Martin and Daniel Givone all provide examples of him doing yeoman’s work.

By the way, in any city on the planet other than Paris, Julien would be recognized as an accomplished lead guitarist as well. So if we happen to need another lead guitar teacher, it’s good to know he can take that Tiger by the tail as well: