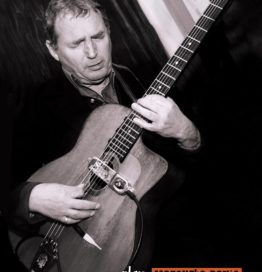 Those who are familiar with his work may well wonder why Daniel Givone is not as well known as other leading Gypsy jazz musicians. Maybe because he has spent much of his life in the west of France, an area less known for its jazz manouche.  Whatever the reason, if Givone is news to you, he’s going to be good news. Here’s a selection from his recent Acoustic Session project with Gwen Cahue. That’s Julien Cattiaux on rhythm guitar. He’ll be with us in 2019 too, as a rhythm specialist.

Daniel has released several albums, some under the Djaz label founded by Patrick Saussois. More recently the Fremeaux label has played host to Givone and Swing of France’s tribute to Jo Privat’s cult classic, “Manouche partie”. Accordionist Erwan Mellac and rhythm guitarist Thomas le Briz will join Givone at DiJ 2019 to share what they’ve learned from their close reading of Privat’s work, which included that of Matelo Ferret on guitar.  Here’s “Rêve Bohémien” from “Daniel Givone & Swing Of France Play Manouche Partie.”

Givone is perhaps best known in the US by virtue of his published instructional materials, including La Guitare Manouche and the Gypsy Guitar Songbook.  The books sprung from the private lessons he has given for years, so at DiJ you’ll have the benefit of his experience both as a performer and instructor.  Many of the lessons in his books are augmented my video examples, so here’s just one of hundreds by way of example. Since his instructional materials have been primarily oriented toward a French audience, that’s the language of the commentary in this video. Not to worry, his hands are speaking your language: