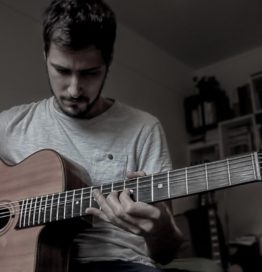 Primarily a guitarist now, Martin Gioani started his musical training with 8 years of violin lessons. But then, radical changes in course have been part of his life. He was, after all, also trained as an engineer. But the glamour, big money and security of the music business was too much to resist.

Martin is best known in France as a teacher and Youtuber. Since 2011 he has hosted a channel called “Guitare improvisation” which according to our resident expert in such matters (Michel Mercier) is the leading French channel teaching improvisation techniques on guitar, with a special focus on jazz and Gypsy jazz. He has 35 million views and 80,000 subscribers that enjoy all the rich content he’s been producing for years. Stuff like this:

One reason for his success may be that whether he’s talking about music, video or pétanque, he always manages to explain things simply and clearly. His online lessons cover harmony, rhythm, composition, repertoire and technique. Guaranteed he’ll offer you the same at Django Camp, the main difference being that, here, you can stop him to ask a question if need be. Right there you have the beauty of what we used to call “real life.” Still, even without that added benefit, the comments on this video make clear how much people appreciate the care he puts into his work:

As a musician and composer, Martin recently released an album with Samy Zouari and Garry Nayah called “Paris Music tales”.  Moody, picturesque and melodic, it’s made of originals inspired by Paris. Here’s one of his compositions, a lovely waltz called, “Paris, la pluie.”