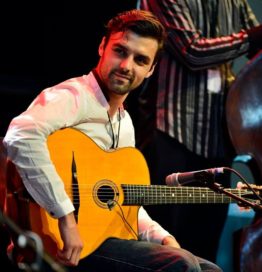 Longtime Django in Juner’s will remember Romain, fondly, from past visits. A fiery lead guitarist with a powerful sound, exciting rhythmic ideas, a gorgeous singing voice, and a love for playing. We are excited to have him back this year in a dual role: leading his own quartet, and as a featured soloist with Django Symphonique.

Romain is a specialist in the Django guitar and swing style. His playing is reminiscent of Django’s style in the late 30’s and he has recorded two albums with a quartet that really captures this sound. He has performed as an accompanist and as a soloist in many venues and festivals across Europe and North America including the Montreal Jazz Festival, the Konserthuset in Stockholm and the Philharmonie de Paris.

Romain frequently works with the famous accordionist Roland Romanelli in a project focused on the repertoire of Frances Lemarque. He is the guitarist in the Paris Swing Collective and the Umlaut Big Band as well.

But before all else, he leads his own Quartet. Here they are playing the classic, “Sheik of Araby”: