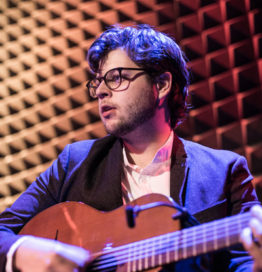 Max O’Rourke has only been teaching at Django Camp for a few years, but his association with the event goes back much longer than that. He was born and raised not far from where we host this event, in West Rutland, Vermont. His interest in guitar began when he was just 6 but it took him 10 years to make it to Django in June. He was already, nonetheless, a fine Gypsy jazz guitarists by the time he first came as one of our rare (but invariably talented) teenage campers. He joined us for a couple more after that, then headed off to Berklee College of Music.

In 2018 he made his triumphant return to Django in June, this time as a teacher and a member of the Gonzalo Bergara Quartet. Here’s something from their exquisite, Claroscuro. Note that when you hold the rhythm chair for Gonzalo, you’d best have more in your pocket than just a solid pompe.

Max’s skill as a teacher is no secret: he has taught at Frank Vignola’s camp at Crested Butte, Django Fest NW, Django by the Sea, and Fiddle Hell.  Equally in demand as a player he has played 35 states and 8 countries with the John Jorgenson Quintet, the Daisy Castro Quartet and Rhythm Future Quartet.

Max released his own debut CD, “Disquiet,” in 2018 and now leads his own quartet in the Big Apple. Take a bite of this lovely original from them, “Waltz for…”.