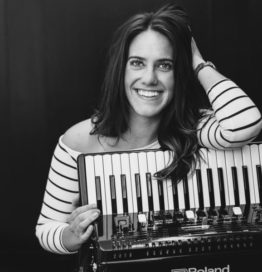 Alicia Baker joined our teaching staff for the first time in 2018 and she’ll be back this year on account of one fact: because—give me a second here to pull out last year’s feedback—89.47% of the people who worked with her rated her as “Terrific.” Welcome back, Alicia!

We expect this to be a big year for accordion—and accordion music played on other instruments—at Django in June because 2019 marks the 100th birthday anniversary of one of the biggest names in la musette and jazz accordion, Jo Privat. We intend to mark the occasion by encouraging players of all instruments to explore his work, especially his classic album, Manouche Partie.

Alicia is well known for her expertise in la musette as well as songs with vocals, both of the French chanson variety and standards from this side of the pond. Here she is performing a medley at the San Francisco Accordion Club meeting in July 2017. The first is “Rivalité Valse” composed by Lo Duca and Joseph Columbo. The second is the well-known “Sous le Ciel de Paris” (Under Paris Skies.)

Alicia has been playing the accordion since the age of 6. She has earned multiple music degrees from Oregon State University, one of which is in piano performance.  Her repertoire spans a wide variety of musical genres including french musettes, jazz standards, gypsy jazz, Parisienne jazz, opera, folk songs, polkas, contemporary, classical, techno and popular hits throughout the decades. She has competed at and won multiple international accordion competitions, in addition to headlining major accordion festivals all around North America. Here’s a video filmed at one of them—the Kimberley International Old Time Accordion Championships (KIOTAC.) She and Canadian Michael Bridges chose “Tico Tico” for an encore and, by all appearances, had a blast.

Alicia’s other bachelor’s degrees are in vocal performance and choral education. She also holds a Master of Music degree in Vocal Performance and Pedagogy from University of Colorado Boulder.  Last year she and Christine Tassan offered two afternoon sessions devoted to French chanson and—again, based on the feedback we received—I’ll be imploring them to offer more of that this year.  Here she is singing “C’est Si Bon.”

(I found a more recent, and better quality video of Alicia performing “C’est si bon”  here, but couldn’t get it to embed for some reason.  Try that one as well!)

Alicia has been working with Roland corporation since 2009, when she competed in the International V-accordion Competition. She now serves as a full-time product specialist, demonstrator, and clinician on Roland digital pianos and V-accordions.  So feel free to geek out with her on all things Roland over lunch.