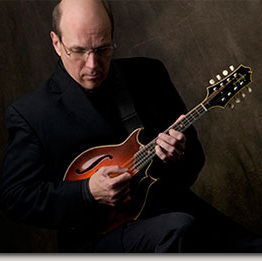 Don Stiernberg recently began his fifth decade as a working musician. Along the way he has been involved in many musical activities: performing, writing, recording, producing, and teaching, but is best known for his mandolin playing. Born and still based in Chicago, the mandolin found Don as he grew up “out in the woods” in the nearly-rural suburb of Wauconda, IL. A desire to make music with his banjo and guitar playing brother led Don to appropriate a mandolin that had been given to him.

Things came into focus both mandolin and life-wise when his parents sent Don to study with Jethro Burns, famous comedian (Homer and Jethro)and the greatest mandolinist of his time. From the very first lesson, Burns was more than a teacher. He was role model, hero, mentor, and friend, and Stiernberg was hooked and hooked bad on the mandolin.His earliest professional experience was in a bluegrass band with his brother (The Morgan Bros.)and a bit later in The Jethro Burns Quartet. Here are Don and Jethro way back in 1983 playing “The Lady is a Tramp.”

Fine performers are not always interested in teaching or good at it. In Don’s case, we get a two-fer, which is why we’ve had him back here so many times. In addition to Django in June he has worked at many other music camps and released three online video instructional courses for (our pal Adrian Holovaty’s) Soundslice.com. Here’s  a snippet from one of them.

Don is widely regarded as a leading exponent of jazz mandolin and the title of his latest release, Straight Ahead, might lead you to believe he’s blowing nothing but, well, straight ahead jazz tunes these days. And he is, if your vision of “jazz” is wide enough to include Django’s classic ballad, “Anouman”, or this Choro standard by Jacob do Bandolim, “Vibrações”. Call it what you will—we call it, and Don, a treat.