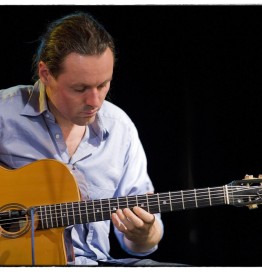 Renaud Dardenne is best known to us at DiJ on account of his role as the lone guitarist in Les Violons de Bruxelles, a group that headlined for us in 2016.  It was he, in fact, who first brought the group’s three violinists—Tcha Limberger, Renaud Crols and Alexandre Tripodi—together for what was supposed to be a one-time, special-occasion concert. The flaw in that plan was that it worked too well. At the end of the evening Tcha exclaimed, “Ladies and gentlemen, Les Violons de Bruxelles!” The name stuck; the group was born.

Renaud’s formal training at the Royal Conservatorium of Brussels paired jazz guitar and pedagogy. But like so many of the artists who teach and perform at Django in June, his musical passions have led him to explore the distinctive musical traditions of different lands and cultures: Greece’s rebetiko , Brazilian music, and of course, jazz manouche.  Back home he teaches Gypsy jazz guitar in a variety of settings, including Muziekpublique and the summer program, AKDT of Neufchateau. Here he plays Je suis seul ce soir with Alexandre Tripodi, another member of Les Violons.

Over the past year or so Renaud (and Alexandre, too!) has also been performing and recording  as a member of the most recent incarnation of the Fapy Lafertin Quartet. Here they are playing “Cinzano.”