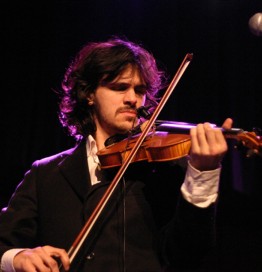 If you ever need a model of how a musician can be at once deeply rooted in a tradition and at the same time limitlessly creative, you could do no better than Tcha Limberger. An outstanding vocalist, guitarist and violinist, he was born into one of the great lineages of Gypsy jazz. His grandfather, the violinist Piotto Limberger, was a contemporary of Django’s and so among the 1st generation of performers to play Hot Club repertoire with a Gypsy twist. His father Vivi was a member of the now-legendary Waso with Fapy Lafertin and Koen De Cauter, and it was they who tutored Tcha on Django-style guitar. Tcha’s first steady gig was as clarinetist and occasional rhythm guitarist in De Piottos, his father’s Gypsy orchestra. As you can see in this video, the family is still making music together. The song is called “Chavo.”

As a young adult he traveled to Budapest to make a serious study of Hungarian folk music traditions. He has since founded both the Transylvanian Kalotaszeg Trio and Budapest Gypsy Orchestra playing authentic Magyar Nota and folk music from Kalotaszeg, Transylvania.

Tcha was first here in 2013, and joined us again in 2015 and 2016. On that last visit he came as leader of Les Violons de Bruxelles, a quintet that turns the standard Hot Club ensemble on its head with two violins, viola, double bass and just one guitar. (The guitarist of that ensemble, Renaud Dardenne, will also be on staff in 2018.) Here they are sharing a tune on the lawn at Smith College during that 2016 visit to Django in June. (Courtesy Patrus53. See more here: Interview With Patrus: 1, 2, 3, and 4)

He is not only a superb performer, but an excellent teacher. Although violinists will have the opportunity to work with Tcha during our third class period at Django Camp, his primary role in 2018 will be teaching guitar. If you’d like a foretaste of what he has to offer, check out the material he and Denis Chang prepared for DC Music School: “In The Style of Tcha Limberger” on either instrument. Here’s an excerpt from that, part of  a lesson on Gypsy jazz rhythm guitar.