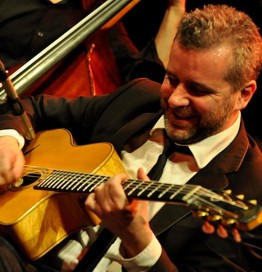 Those who were here in 2016 will be happy to hear that Samy Daussat will be back by popular demand in 2019. When last we saw Samy he was among our most well-received teachers. He left his mark in a variety of ways, not least by serving as musical director of pop-up performances by ensembles made up of his students. In every instance they left us  laughing, applauding and, above all else, appreciating the skill and energy Samy brought to the effort. Here’s a clip of one of them under the big tent:

When I (Andrew) started learning about the broader tradition of Gypsy jazz in the early 2000’s, among the first books I picked up were the two volumes of “Astuces de la Guitare Manouche” co-credited to Angelo Debarre, Denis Roux and one Samy Daussat. They were both very well done and helped me get a better sense of what makes this style of guitar distinctive. Here’s a video in which Samy demos one of the tunes covered in Vol. 1, Swing Gitan

Since then Samy has continued to produce Gypsy jazz instructional materials in a variety of media, including Gypsy Station, an app that provides Gypsy jazz accompaniment tracks.

Students of rhythm guitar (which should be all of us guitarists) may know that Daussat was best known for many years as a sideman for a who’s who of Gypsy jazz: Babik Reinhardt, Raphaël Faÿs, Moreno, Patrick Saussois, Tchavolo Schmitt, David Reinhardt, Angelo Debarre. No less an authority than Ninine Garcia said about him: “With humility, he has graduated from the challenging school of rhythm guitar, exemplifying the old saying: walk before you run”.

By now, he runs with the best. It was a full decade ago that he released his first CD as a group leader, “La petite famille.” He can and does play trad Gypsy jazz, but when you revisit GJ standards as many times as Samy has one can understand the desire to experiment a wee bit. So just for fun, check out his take on Django’s “Manoir de mes rêve” from that first solo recording. Shocking! Sacriledge! Lovely!

One of Samy’s more recent projects on Label Ouest is of interest to both students and fans of Django’s music: the remastering of the entire recorded output of the Django and Stéphane’s string Quintette, complete with a booklet of grilles guiding would-be accompanists through the chord progressions of every song.  Can you say “gold mine” in French?

When not wrangling others, Samy Daussat can be found performing in the most intimate clubs of Paris and the biggest festivals of Europe. This last clip shows him and Costel Nitescu having a grand old time at a festival in Tourrettes about 5 years ago. Samy opens with Tchan-Tchou’s, “La Gitane” and then they enjoy a romp on Gilbert Bécaud’s “Et Maintenant” If you know the tune as “What Now My Love?”, you’ve got to choose sides: are you with Samy, or Elvis?