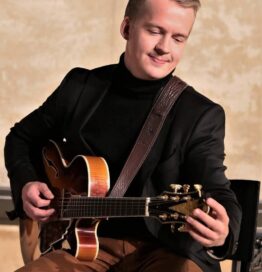 Born in Nurmes, Finland and now often based in NYC, Olli Soikkeli was introduced to the music of  Django Reinhardt and the broader Gypsy jazz tradition while still a teen and it has been his primary focus as an artist ever since. He has played jazz clubs and festivals across Finland, and toured Europe with Sinti Guitarist Paulus Schäfer as the Hot Club d’Europe. Here he is jamming with Paulus and others of the extended Schäfer/Rosenberg clan in the fall of 2021.

Still a young man, Olli has played more venues and with more big name artists than we have space for here. (Plenty of space, though, on Olli’s website.) We do have room, however, to mention a particularly close link he has to this event by virtue of his place in one of New England´s premier Gypsy jazz outfits, Rhythm Future Quartet.

Co-led with violinist Jason Anick, RFQ released its debut album in 2014 followed by ‘Travels’ (2016), receiving rave reviews including Best Album of 2016 by Huffington Post and All About Jazz magazines. The fall of 2018 marked the release of, “Rhythm Future Quartet and Friends”, which features contributions from vocalist Cyrille Aimée, bandolimist Hamilton de Holanda, and guitarist Stochelo Rosenberg. Here’s a quick preview of that project:

For the last few years Olli has been, literally and musically, on a journey. In 2017 he toured and recorded an album, ‘Rise and Grind’, with virtuoso accordionist Julien Labro. In early 2019 he recorded with Grammy award winning pianist Marian Petrescu. Since 2018 Olli has enjoyed a duo project with New York based Brasilian 7-string guitarist Cesar Garabini playing mostly Brasilian Choro. Given our own love of that rich musical tradition—oh, do check out our sister event, Choro Camp New England—we hope to capitalize on Olli’s presence to explore the intersection of Choro and Gypsy jazz. Here he and Cesar Garabini demonstrate just that on this rendition of Jacob do Bandolim’s classic, “Doce de Coco”.