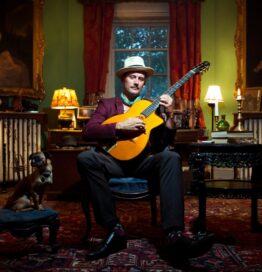 Russell Welch is an in-demand guitarist with many different bands based in New Orleans including: Meschiya Lake and the Little Big Horns, The Hot Club of New Orleans, King James and the Special Men, and The Jumbo Shrimp Jazz Band. For just one sampling of his diverse catalog, here’s a cut from his his fourth album, “Acetate Sessions”. A mix of originals and classics, It was recorded using acetate masters and vintage recording equipment, to recreate vintage recording sounds, which, according to an Offbeat Magazine review, “crackle with the energy of youth discovering someplace magical…(and) sound as fresh as tomorrow.”

Like so many artists, Russell had to get creative to survive the pandemic, Hence, the Russell Welch Quarantined Gypsy Jazz Happy Hour with Russell on rhythm, bass and lead guitar. This “live” lasts almost an hour. Don’t have that kind of time? Then just enjoy his opening “J’Attendrai.” Exquisite.

Django in June welcomes Russell for the first time this year. It won’t be the last. You can learn lots more about him at russellwelch.com.