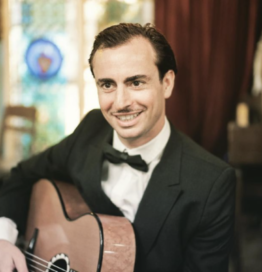 New York City Gypsy jazz guitarist Charlie “Roman” Castelluzzo will join the DIJ teaching staff for the first time this summer. Charlie’s quartet The Bailsmen is an excellent example of North American Gypsy jazz while his other combo, the Charlie Roman Hot Club, is even more traditional.

When he’s not playing the City or touring either coast with his own bands Charlie is can be found plying his trade in concert with other notable players (e.g. Duved Dunayevsky, Brad Brose, Adrien Chevalier). Like Duved, Charlie is keenly aware of the stylistic elements of various Django periods and looks the part on most occasions. Come for the impeccable fashion sense; stay for the impeccable gypsy picking tips.