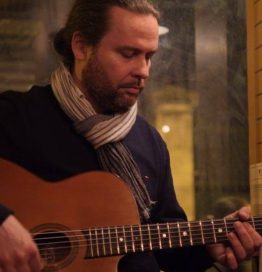 I [Andrew] usually write the artists profiles you see here on the Django in June website. But since Michel “Mitch” Mercier was going to be with us this year I asked him to help with this task. So in 2019 the profiles of our European artists are part Mitch, part me. When you read his own profile below I hope it will be obvious why I invited him – not only to help me with the profiles, but to help you at Django Camp.

It can be hard to write about oneself, so our plan was that I would write Mitch’s profile. When he wrote what you see below he was just trying to provide me with some info to work with. Instead, I’d like to share what he wrote with only minor edits. It is much longer than our typical profile, but I for one found it interesting reading. It is full of breadcrumb trails you might want to follow further.

It also clearly demonstrates, to me anyway, why we North Americans need an event like Django in June. Living in Cleveland, or Houston or Toronto, we are simply not going to have the kinds of opportunities that have risen again and again for Mitch Mercier. And even if we had, would we have capitalized on them as he has? As the story below will make clear, he’s a terrific resource for anyone with an interest in this musical tradition. With that I give you, Michel Mercier…

My father taught me my first 4 chords on guitar at age 13, a critical assist I leveraged to study rock and heavy metal.

I had my first exposure to Django at around 17 from a schoolmate studying guitar with Jean Bonal, who had known Django. At first it seemed «weird» to me to be honest, but I definitely caught the virus myself at the age of 19 when buying my first Django CD and later hearing Samson Reinhardt busking in Lille (north of France) around 1999. He was the son of Django’s direct cousin, Python Reinhardt. Around the same time I discovered a CD of Bratsch featuring Angelo Debarre. I was not aware that jazz manouche existed and it was a shock!

I arrived in Paris in 2000, attended my first Samois festival (I’ve only missed one edition in 18 years) and started working as a project manager (and later some Artistic director functions as well ) for Universal in the jazz department. A few months later I met Stephane Wrembel for a lesson and he kindly showed me the right hand technique. I then started studying with Serge Krief, seeing him weekly for almost 2 years. It was a huge inspiration for me because he’s a true improviser, a phenomenal guitarist and a lively person. We have stayed friends ever since and I also like to hang out with his two phenomenal sons. This was also the time of the Locandiera jam-sessions with Frangy Delporte, Seb Giniaux, Chriss Campion, Edouard Pennes, Aurélien Trigo and others.

In 2002 I met Alain Antonietto for the preparation of the “Django Retrospective 1934-53” 3 cd box-set (more than 50 000 copies sold and numerous awards from the jazz press), made to mark the 50th anniversary of Django’s death. With previously unseen photos, it was the first Django compilation to cover his whole career. All tunes pitched A 44O so musicians could transcribe the songs easily. We used a lot of original 78’s for the mastering. The package included a 78 Page booklet in both French and English filled with anecdotes and an introductory text by Antonietto.

I became close friends with Alain and he has taught me a lot about Django, jazz and Gypsy jazz. Since that first project we have taken on several others together. Some came to fruition, some didn’t! With Alain, Emmy award winning director Didier Portal and Universal we started a Django documentary project for which we conducted interviews with some of Django’s musician friends. Alain, of course, was also involved in the Django exhibit at the Cité de la musique museum in Paris. I wish every gypsy jazz fan could meet this loveable and knowledgeable man.

During all these years, I worked on numerous jazz, bossa-nova, blues, and french chanson albums, reissues or compilations. I was, for instance, production coordinator for the “Latchès” album with the eponymous band composed of Gino Roman, Chriss Campion, Yorgui Loeffler and Steeve Laffont. An excellent but not well-known album:

I also did a jazz manouche compilation that something of a success in France. It features both the greatest artists and the most famous tunes from Joseph Reinhardt up to the Selmer 607 team. The idea was to present the widest scope of gypsy jazz styles and artists. Funny to see how the popularity of Gypsy jazz hit a new peak in the 2000’s! I managed other projects of the same kind.

Since the early 2000’s I’ve been a regular on the French Gypsy jazz forum – originally “gadjodrom.com”, it became “manoucheries.com” and now “guitarejazzmanouche.com“. I was once a moderator on that forum but became a simple member again. Still, I created a post with the regular paris jam-sessions and try to keep it up to date. Always useful for friends or contacts looking to jam while in Paris!
http://guitarejazzmanouche.com/forum/viewtopic.php?f=2&t=34245

During the 2010’s I started reviewing albums for Djangostation.com along with Francis Couvreux, Daniel John Martin and Sébastien Léger. I’ll probably be the last to do so because the site is about to close. The owner doesn’t have time to keep it up anymore and I don’t have enough money to buy the site. If you haven’t seen it, do so while you can, it’s a goldmine: http://www.djangostation.com/

I’ve also contributed several articles or interviews on Djangobooks.com and for a couple of years now, I regularly write album reviews in the French magazine “jazznews” for Gypsy jazz or guitar releases.

This year I created the very first guided walking tour devoted to Django and Stéphane in Pigalle and Montmartre.

I’m also part of a collector/historian working team that gathers every Django photo ever printed. If I mention Patrus53, I guess it will ring a bell? Managed by Roger Baxter, this group incudes Django geeks from all over the world.

Another project: I’m on a working team managed by David Reinhardt to find solutions to have a Django festival back in the village of Samois. My role is more modest in this because many people are involved and most of the meetings take place in Samois itself. But I’ve known David Reinhardt professionally for years.

Generally speaking I love history and think everyone interested in the style should know it. I often notice that even very good players don’t know much about it.

As a guitarist, I would place myself (modestly) in the Serge Krief school: staccato sound with a focus on phrasing, energy and improvisation. People often tell me I have a strong, clear sound and that’s what I would like to transmit in my workshops. It’s not about playing “like a lumberjack” (as we say in French); it’s about projection and presence. You may play the finest phrases with the finest tone, but if no one can hear you it becomes pointless. It’s all about being able to play in all possible contexts.

Serge taught me the basic tools to improvise and I always try to tell a story when I play, to get the audience’s interest. I’m not super technical or fast, which has taught me to find some tricks in an effort to be interesting. I try!

My biggest influences are  Serge himself and then players from the east of France and into Germany. I don’t know if it shows, but that’s what I like. I don’t know much about theory and can’t really read or write music.

These are the newest and cleanest videos of me playing: https://michelmercier.fr/videos/

I have a band, the Hot Club Saint-Germain but since I have a day job, we have very few gigs. I often gig with other friends in different contexts (private events, jams, concerts) since almost everybody knows each other in the Paris gypsy jazz scene. I have been lucky enough to experience the stages of Les Petits Joueurs, l’Atelier Charonne, le Studio de l’Ermitage. Here are a couple videos to share:

I’ve been to jam sessions once or twice a week for 15 years now and I saw the beginnings of Sébastien Giniaux, Adrien Moignard, Chriss Campion, Aurélien Trigo, Eva Slongo, Edouard Pennes, The Krief Brothers, Remy Oswald and many more now-established artists. I therefore have a lot of experience with —and a thing or two to share about—both good and bad jams. (I dare you to get me started.) I’ve always liked meeting new people and helping them connect, which makes me a very happy Jam-session MC alongside my mate Stephan Nguyen at the Green Linnet:

I’ve also witnessed how some musicians manage to develop careers while others fail to do so. You will not be surprised to learn that the best known or most-working artists are not always the most musically skilled! Perhaps this would make for a good “special topic” session at Django in June.

I love guitars and have several gypsy jazz guitars. Whatever the price range, I like to find great value guitars. It has to resonate well and be solid. Let’s experiment together!