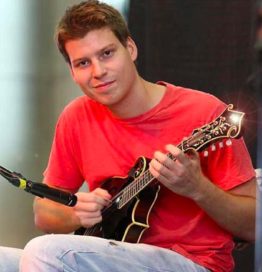 Tulsa native Isaac Eicher started playing the mandolin at 9 years old.  His parents—violinist Shelby Eicher and vocalist Janet Rutland—are both accomplished artists who saw to it that their home was filled with handspun jazz, bluegrass and western swing.  By his teen years, Eicher was competing on a national level, and winning: he took first place prizes at the Walnut Valley Mandolin Championship in 2006 and Rockygrass in 2010.

Isaac’s musical journey became a more literal one when his interest in the Spanish language took him to Valencia, Spain. There he began to incorporate world music styles like Gypsy swing, Brazilian samba, and Cuban montunos into his already strong foundation in jazz and bluegrass music. Here is is doing the chord melody thing on a tune that has been a standard on both sides of the Atlantic since the days of Django himself, “Dinah”:

Currently, Eicher resides in Nashville, Tennessee.  He performs live with a wide range of artists, such as Marcela Pinilla, Giovanni Rodriguez and Rebecca Frazier, to name a few.  His debut solo album “Native Language,” featuring originals arranged for an acoustic quartet ain’t Gypsy jazz, but it’s beautiful music worth checking out.

For our purposes, however, Isaac is going to lock into Gypsy and Jazz mode. He’s a terrific teacher ready to share with those who are ready to learn.  We look forward to having him in the house—the Limehouse, that is: