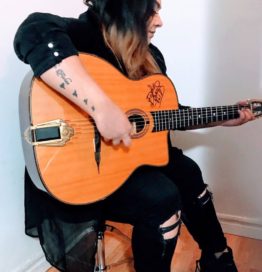 If Gypsy jazz as a whole is what those in the biz would call a “niche market,”  then Django in June’s target market is a niche of a niche.  A micro niche.  A nichette. What we try to do here is offer North Americans relatively easy access to expert instruction in what I (Andrew) lamely call “the European approach” to playing Gypsy jazz.

Strictly speaking that means very little because there are so many different European approaches to playing Gypsy jazz. Mini micro niches. Still, any American jazz guitarist who goes to Europe and tries jamming on jazz manouche with people whose musical roots run deep in the genre is going to quickly notice many differences.  Those difference are what I’m referencing when I use the terms “Gypsy jazz” or “jazz manouche.” It’s an inevitably inexact way of summing up the unique contributions that Django Reinhardt and his musical heirs brought to what had previously been a purely American musical tradition. Those elements are sometimes frustratingly foreign to us Americans.

Not so, though, for Debi Botos, whose Romungro Gypsy heritage (a variety of Hungarian Roma) may help explain why she is developing so quickly into an excellent Gypsy jazz guitarist. She lives in Toronto now, and has most of her life.  But her family’s roots are in Rakamaz, Hungary, a village located where the rivers Tisza and Bodrog converge. Her mother would sing nóta and csardas around the house and Debi soaked it up.

Her father and one brother are jazz drummers, another plays guitar. It would be hard to imagine better preparation than that for your first encounter with Django’s music. Or your first trip to Django in June…which for Debi was only in 2018! With a little help from Denis Chang she found herself jamming in Angelo Debarre’s suite, with the grand master looking on. Not long after, those of us who follow Debi on Facebook were treated to her encounter with Dorado and Samson Schmitt when father and son played Koerner Hall at the Royal Conservatory of Music. In 2019 we got to vicariously sit in on her endless jamming around the campfires of Samoreau.

When you have Debi’s talent and dedication, those sorts of encounters have a way of developing into friendships and collaborations. For example, in the video below she is joined by two giants of contemporary Gypsy jazz—Samson Schmitt and Ludovic Beier—for a rendition of one of her own compositions, “Bolero for Schmitt”. Like theirs, our own friendship and collaboration with Debi is just beginning. At Django in June 2022, yours can too.