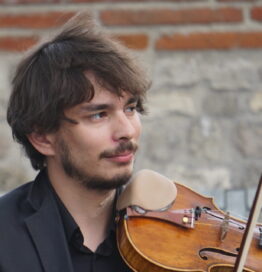 Jules Dussap joins us with Django Symphonique this year and will serve as one of our violin teachers. There are, by the way, various groups that have gone by that name. The Django Symphonique we’ve invited this year can be seen in several of Edouard Pennes’ “Paris Jazz Sessions” videos on YouTube. There, you may notice some variety in the personnel from one performance to another. In all of the various formations, however, Jules Dussap is leading the string quartet. He’ll perform the same role for the string quartet we’ll pull together for Django Symphonique’s performance during our weekend concerts.

Born in 1990 in Clermont-Ferrand, Jules started playing the violin at the age of five and the piano two years later. He continued his musical studies at the Ecole Normale de Musique and then at the CNSM de Paris, where he founded the Hanson Quartet in 2013, an ensemble with which he won numerous international prizes at the Lyon, Vienna, and Geneva competitions. This effort led him to perform in major European venues such as the Philharmonie de Paris, Wigmore Hall, Victoria Hall, Auditori de Barcelona, as well as in Asia.

In 2019, 2021 and 2022 on the Aparté and Brecords record labels, his quartet released various recordings that have been highly praised by French and international critics, winning the Diapason d’or de l’année 2020, a Choc Classica and the BBC Choice award from the British press.

An eclectic, accomplished musician, Jules is an active member of the Parisian jazz manouche scene, performing with artists such as Sanseverino, Felicien Brut, Tangomotan and the Paris Jazz Session collective.

Check him out here playing a gorgeous rendition of the elusive Django and Grappelli composition, “Tears”: