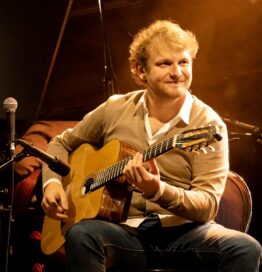 Originally from Corsica, the Island of Beauty, Fanou Torracinta is a 28-year-old jazz guitarist who now makes his home within the formidable jazz scene of Paris. He joins us for this, his first Django in June, as one of the featured soloists with Django Symphonique. This video is from one of their rehearsals:

From a very young age, Fanou surrounded himself with some of the best musicians in the style and immersed himself in the Django Reinhardt music community. In 2012, still a teenager, he toured the island festivals with Tchavolo Schmitt.

In 2021, Fanou released an album under his own name that links his Corsican and Manouche musical influences. It consists of mostly original compositions and is entitled “Gipsy Guitar from Corsica.” Check it out on Spotify here. Rumor has it that there will be a second volume coming out in 2023.

When he was seventeen years old, Fanou created the Corsican Trio/Quartet with singer Arnaud Giacomoni, Django in June favorite William Brunard on bass, and Bastien Ribot on violin (who joined us a few years ago with RP Quartet). Their albums are some of the best modern Gypsy Jazz recordings available and merit years of study.

Here’s Fanou with another quartet, smoking the standard, “How About You”: