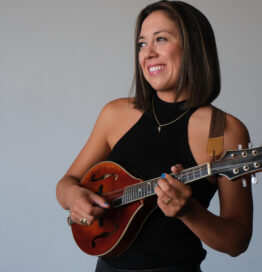 Joining us for the first time this year is Eva Scow, a mandolinist and violinist from California. Eva began studying music at a young age, starting on the piano and violin at age 4, and later adding the mandolin at age 8. Growing up she played in Classical orchestras and bands, exploring different kinds of music from Bluegrass to Brazilian Jazz. She began playing professionally in high school, collaborating with different musicians/bands around the country.

At age 15 she recorded for mandolin pioneer David Grisman on his album ‘Tone Poets’. She was selected to perform at Carnegie Hall in 2006 for a Young Artist Spotlight alongside bassist Edgar Meyer. She recorded her debut album with guitarist Dusty Brough entitled ‘Sharon by the Sea’ (Adventure Music) in 2007. The album features influences from Flamenco, Jazz, and Brazilian folk music. That same year she also recorded with jazz guitarist Anthony Wilson for his album ‘Power of Nine’ (2007).

She has recorded on numerous projects, ranging in styles from R&B, Country, Pop, and Jazz. She continues to play in numerous groups across California as a sideperson, exploring traditional styles and contemporary jazz idioms. Welcome, Eva!