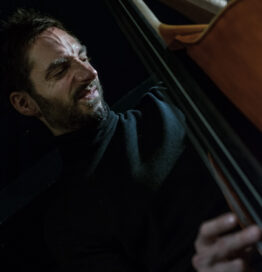 Edouard Pennes is one of the foremost people playing, organizing, and promoting swing music in Paris. One example: in his “Paris Jazz Sessions” YouTube series he brings like-minded and highly skilled musicians from all over the world to perform on the streets of Paris.  Several of these sessions feature the Django Symphonique project we’re hosting this year, in which a traditional GJ rhythm section and lead guitarist are joined by a string quartet. In that setting, Edouard usually plays bass, and he’ll be serving as bass teacher at DiJ this year. He’s also a highly skilled guitarist, however, so we’re bound to see and learn from him in that role as well.

Edouard began his musical life at the age of 7 when he entered a conservatory to study classical guitar, a study he pursued for 10 years. From there he went on to found the avant-garde Django jazz group RP Quartet featuring the virtuosic violinist, Bastien Ribot, and expert rhythm guitarist, Remi Oswald. RPQ was among our featured guest artists in 2014.  They have released three albums with “Frémeaux et Associés” and performed at more than 500 venues and festivals around the world.  Edouard also works with the artist Isabelle Georges from Padam, Padam and Broadway Enchanted.

Edouard is an accomplished musician with an outstanding understanding of music theory, rhythm, and technique. Luckily for us, he is particularly interested in Swing and Django Jazz. Check him out here playing bass with some of the best: