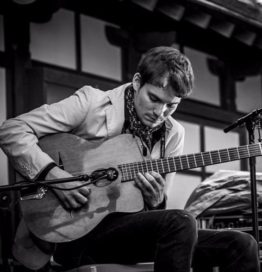 Setting the digital needle down on Gwen Cahue’s album, Memories of Paris, you quickly realize this is not just another barnburner Gypsy jazz album. The opening track is “Here’s That Rainy Day,” the 1953 song by Jimmy Van Heusen and Johnny Burke. Published the same year that Django passed away, the song has never been a huge part of the GJ songbook — its inclusion on Gwen’s album points to a different, modern take on the Django legacy.

Self taught and with a background in rock and modern jazz, Gwen takes the traditional Hot Club repertoire and infuses it with the sounds and compositions of modern masters like Horace Silver, Michel Petrucciani, and Antonio Carlos Jobim.

Some people have been asking for years when we were going to invite Gwen Cahue to Django in June. Everybody else should have been asking, too. This year we find out why. 🙂