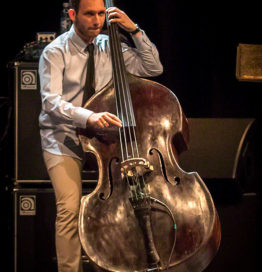 By now a DiJ regular, bassist extraordinaire William Brunard took to the Gypsy jazz way after hearing Tchavolo Schmitt. Born into a family of musicians, William was schooled as a teenager by Ninine Garcia; he was still focused, at that point, on the guitar. It was the guitarist Frangy Delporte who steered Brunard toward the bass — a fateful nudge, it turned out. In the years since, William has become the go-to bassist for a Who’s Who of Gypsy jazz luminaries, including Angelo Debarre (William was instrumental, so to speak, in bringing Angelo and his son Raangy to DiJ a couple of summers back — thanks William!).

But if his rock-solid support has earned him first-call status, William has also stepped out as bandleader. When he decided to record his first CD as leader not long ago, the many greats he had supported came out to return the favor — the musicians for the Django Stories sessions included Angelo, Bireli Lagrene, Hono Winterstein, Nous’che Rosenberg, and more. Not a bad roster for a debut, and one that says worlds about William’s standing in that rarefied world.

William joins us this year as a member of the Gwen Cahue Quartet. But, really, he could be playing with anybody. And at Django in June, that includes you!