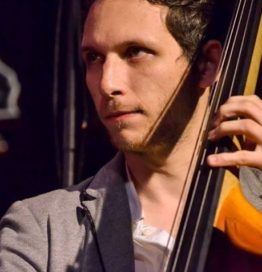 William Brunard was born into a family of musicians, but first inspired to take up jazz manouche after hearing Tchavolo Schmitt live and later, recordings of Django Reinhardt. As a teenager William was schooled on guitar by Ninine Garcia, of the La Chope Des Puces and by Frangy Delporte.  It was Frangy who suggested William try double bass, a suggestion seconded by the late Patrick Saussois. It was an excellent idea, from which William has made a career of playing with the very best in the Gypsy jazz business. Here he is with Bireli Lagrene—who gives him the nod to take a solo at around the 4 minute mark.

For years William  hosted a jam session every Sunday at l’Atelier Charonne in Paris (sadly, now closed) at which those same great players often sat in as invited guests. In this clip at l’Atelier he’s performing on guitar with one such player, Angelo Debarre. William has been Angelo’s go-to bassist for several years now and played a major role in bringing Angelo and his son Raangy to Django in June last year.

William has spent years supporting other artists, primarily as a bassist, which is a great way to earn their respect and appreciation. No small surprise, then, that when he decided to record his first CD as a group leader just about a year ago, he was able to call on the best in the business. The resulting recording, Django Stories, brings together an incredible roster of artists. On this cut alone you have Bireli Lagrene, Mathias Levy, Nous’che Rosenberg, Hono Winterstein…and one of this year’s bass instructors, our dear friend, William Brunard.