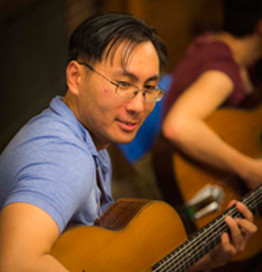 Denis Chang first joined our staff in 2005—year 2, when the event was just a weekend—and has been with us ever since. In the early 2000’s Denis attracted the attention and earned the gratitude of many students of the style by virtue of his high-quality transcriptions of solos by Django Reinhardt and other GJ masters, especially those of the extended Rosenberg clan.

Even though Denis is widely appreciated for the precision and accuracy of his Django transcriptions, he has one main reservation about sharing them: that he’s robbing you of the benefit you would gain by doing the transcription yourself.  The solution? Encourage people to transcribe themselves, and provide some guidance along the way in how to do so. In this extended video, Denis walks you through his thought process as he re-transcribes a solo that was sent to him for review.

Since 2011 Denis has been building a wider platform from which to share. His DC Music School  offers an incredible  selection of carefully crafted instructional videos in a variety of styles, including Gypsy jazz offerings from the very best of the genre, many of whom have been on our staff over the years. In these videos Denis rarely puts himself in front of the camera. Here’s a rare exception:

Denis will be the first to tell you that as useful as video and written materials are, there’s no substitute for face to face connection and music-making. Nor are we looking for one. Getting together to make music is what Denis’ own travels and studies have been all about, and the instructional materials he now makes available through DC Music School serve that same end: to give you the tools and the tunes to participate in the music making yourself. When you do so with Denis Chang there’s no telling what tune you’ll come away singing—but whatever it is, you’ll likely be singing his praises.