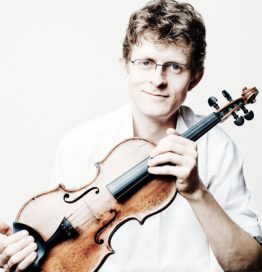 Since the earliest editions of Django in June Tim Kliphuis has joined us roughly every other year to head up our violin team. My first exposure to Tim’s work was on one of my very favorite Gypsy jazz recordings, Fleur D’Ennui, with Fapy Lafertin. Here’s just one cut from that splendid CD, “Stranger in Paradise”:

I believe it was through those early collaborations with Fapy that Tim first began to make his mark on the international Gypsy jazz scene, but he has since performed and recorded with many of the top-tier GJ guitarists including Stochelo Rosenberg, Angelo DeBarre, Robin Nolan, Gismo Graf and Paulus Schäfer. In fact, Tim and Paulus performed together at Django in June just a few years ago. Here’s a taste of the two of them hard at work and play:

We have Tim back again and again because we can count on him not only as a dynamic performer but as a terrific teacher. A recognized expert in the jazz violin styling of Django’s most memorable counterpart, Stephane Grappelli, Tim teaches string improvisation at the Conservatoire of Amsterdam and is professor of Jazz violin at the Conservatoire of Tilburg, Holland. He offers workshops on Grappelli’s style around the world, puts on his own Grappelli-Django Camp in Holland and has produced a rich and growing compendium of instructional resources including “Grappelli Licks: The Vocabulary of Gypsy Jazz.” Stephane Grappelli Gypsy Jazz Violin,” both published by Mel Bay, and “Gypsy Jazz Violin Etudes” available through Denis Chang’s DC Music School.