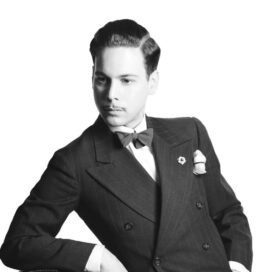 Last time Duved Dunayevsky was here—that was in 2017—he was still a relative newcomer to the Paris Gypsy jazz scene, one he was taking by storm. By now he has made the transition from “emerging” to “established” artist whose voice is clearly his own, and yet strikingly reminiscent of Django Reinhardt’s.

Born in Israel and largely self taught, Duved spent his teens playing jazz fusion with a special focus on the work of John Scofield. He knew of Bireli Lagrene back then, he says, but only through Bireli’s work with Jaco Pastorius. After discovering Django’s music Duved dedicated himself completely to it. Along the way he has garnered a reputation for his remarkable ability to channel “that sound” loved by Django fans and sought by students of the style.

In 2015 he received a visa of “Talent and Competence” from the French government and moved to Paris where he formed Duved‘s Hot Five, and more recently, Duved’s Transatlantic Five. That ensemble is designed to accommodate a shifting roster of artists from both sides of the aforementioned Atlantic, but always with Duved the helm and violinist Daniel Garlitsky (also joining us at DiJ this year) by his side. Here the group also features vocalist Tatiana Eva-Marie on a tune Django recorded very early in his jazz career, one the lyrics of which you may never have heard before, “I Saw Stars”.

Another equally interesting and even more ambitious project is Duved’s Prebop Orchestra, a band of ten musicians playing original compositions influenced by swing and classical music. Check it out:

You can get a thorough introduction to Duved’s style from the DC Music School release, “In the Style of Duved Dunayevsky“, or through his course on Soundslice. But as we’ve learned over the course of this pandemic, online learning is a wonderful tool to have, but no substitute for hang time with each other. Come hang with Duved at Django in June 2022.