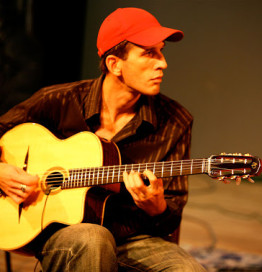 If you need an introduction to Sébastien Giniaux, all we can say is: lucky you. You, friend, are in for a treat.

Longtime Djuners, however, have already had the opportunity to marvel at him on any number of occasions over the years: on his own, with Antoine Boyer, with Les Doigts de l´Homme, and with violinist Mathias Lévy. He joins us this year as a featured soloist with Django Symphonique.

Born in 1981, guitarist, cellist, composer, arranger, and painter, Sebastian Giniaux is one of the most important musicians of French Jazz guitar today. He is recognized internationally as one of the greatest interpreters of the Gypsy jazz style as well as one of the most original.

Sébastian began his musical life with the cello at the age of six at the Conservatory of Bourg-la-Reine, then continued his training in classical music at the conservatories of Boulogne and Aubervilliers la Courneuve. The guitar came into his life at the age of 18 when he fell in love with the music of Django Reinhardt and began his deep study leading to his eventual mastery of the style. From there he went on to become accomplished in more contemporary styles of jazz, the music of the Balkans, West African music, improvised music, and more.

In 2015, Sébastian founded a group with the Malian Kora player Cherif Soumano called “African Variations.” He also leads groups such as the quartet “D’ici-Danses (original compositions and modern jazz), and a duo with Joris Viquesnel called “Melodie des Choses” (Balkan music, jazz, and other world music). He accompanies singer Paloma Pradal, plays in the New York Tango trio with Richard Galliano and Diego Imbert (Biréli’s bassist for many years), a trio with Mathias Levi and Jean-Philippe Viret (DiJ alums), and he is one of the soloists in the Gypsy jazz collective “Selmer 607.” He composes and arranges for the singer “Norig” and was a member of the world-famous Romanian folk music group “Taraf de Haidouks” for five years.

Here he is with another of this year’s guest artists from France, Romain Vuillemin.