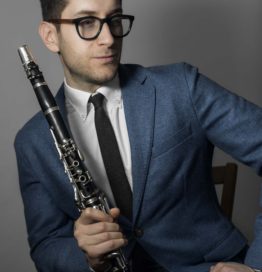 In 2016 Giacomo inaugurated Django in June’s wind/reed instructional track and he has ruled that roost ever since.  Not just because I love working with him, but because our Django-campers do. It is a testament to his skill as a teacher that he now draws players of other instruments to his classes as well. Even guitarists! If you did not gasp upon reading that, you have never tried to get guitarists to study with a clarinet player before. Nor did we—the guitarists in question just got wind, so to speak, that working with this guy is a joy.

Born in Italy, Giacomo grew up in upstate New York. He picked up jazz very early on account of his mother’s great affinity for Dave Brubeck. Piano lessons at 5, clarinet at 10, saxophone at 12. At each stage along the way, he developed a deeper interest in classical and jazz music.

At university, Giacomo followed the classical performance path. He completed a Bachelor’s of Music at Boston University in 2009 and a Master’s Degree at McGill University in 2011, both in classical clarinet performance. From there, he moved to London to work in Boston University London Programmes’ administrative office. His days were spent at the computer and nights learning the London scene at places like the Nightjar, The Haggerston, Ronnie Scott’s.

Don’t tell his mom, but he quit the day job. Now you can hear him regularly in London with Kansas Smitty’s House Band. And it’s getting to the point where you can hear him annually at Django in June. This clip is from his 2016 performance at Northampton’s Academy of Music:

If you’d like to get a head start on your studies with Giacomo, he is now on the ever-growing roster of artists offering instruction through Denis Chang’s DC-Music School. You can check out In The Style of Giacomo Smith there. Here’s a little sample of what to expect—an etude on the changes to All of Me: