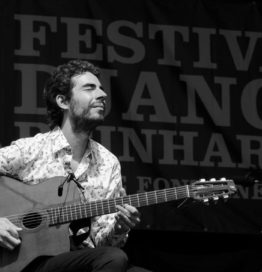 A brother from our sister city of Montréal, Damien Levasseur discovered a passion for the music of Django Reinhardt and improvisation at the age of 14. Bada-boom,  he got busy learning the subtleties of jazz manouche and improvisation.  When he was 16 he won the 1st prize of the Montréal Jazz festival contest and three years later, the “Grand prix de la guitare de Montréal.”

He has played with a number of groups over the years, starting with “Mânouche Swing” with which he recorded two albums. In 2012 Damien formed Tcha-Badjo with the guitarist Charles Fréchette. This project was made, à la gitane, to mix music and travel. That mix would have led any Gypsy jazz musician to the Festival Django Reinhardt. But it would not have led every musician to the festival mainstage, as it did Tcha-Badjo back when “Samois” was still held in Samois:

Damien Levasseur has played a number of roles for us over the years, but this time he’s coming for just one thing: to help you pursue your own Gypsy jazz journey with a little more confidence and joie de vivre.  Et bien, allons-y, mes amis!