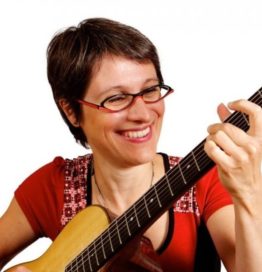 Christine Tassan (whom you can visit at www.christinetassan.com) was born in France, but emigrated to Quebec in 1994. Her musical migration led from her first love, singing, through classical guitar and songwriting before bringing her to a serious study of Swing guitar à la Django. You can recognize and enjoy all these influences in the music she has made with Christine Tassan et les Imposteures. Like this one, the title track from their disc, Entre Félix et Django:

Christine was among the first to make the transition from student to teacher at Django in June. When here as a camper in 2012 she could be found nightly jamming with our most skilled players in Michael Bauer’s suite, the famous Hot Club of Rm 101. There were many fewer women attending Django in June back then, something that didn’t seem to phase her a bit. Since joining our teaching staff in 2013 she has consistently received rave reviews by  the many students who have worked with her.

Our 2022 update of Christine’s profile would be incomplete without mention of the JUNO Award nomination she recently received for her album, Voyage intérieur, in the Jazz Album of the Year (band) category. This is the 4th such nomination for this album, after ADISQ, GAMIQ and Opus Awards. Congratulations, Christine! A bientot!